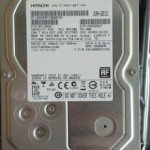 The first “enterprise” model 4TB Ultrastar 7k4000 (HUS724040ALE640) disks are starting to ship from Hitachi. One hundred of them are currently sitting in my office with a manufacturing date of June 2012. 🙂

They are 7200 RPM with a SATA interface and my expectation is that this is the last generation of HGST SATA disks with time limited error recovery now that Western Digital has completed it’s purchase of Hitachi Global Storage Technology. I suspect this as WD recently split the 10K RPM SATA “Velociraptor” line into the “desktop” Velociraptor lines and “enterprise” XE (also briefly known as the WD25s) lines which seems to only differ by the XE series having TLER enabled firmware and a SAS interface. That reorganization is probably a sign that most HDD controller chips, similar as to what happened with LSI RAID controller chips over the last few year, now all support both SATA and SAS and are trivially configurable between the two protocols via packaging modifications or firmware. That’s clearly a vendor interest in forcing the “enterprise” market over to SAS disks as that interface still demands a cost premium. I also suspect we may see a SAS version of the Ultrastar 7k4000s in the near future.

Rather remarkably, July was the expected shipment time frame indicated to me by a number of my suppliers as indicated to them by Hitachi directly. The fact that this SKU shipped on time may be a sign that the manufacturing problems in Thailand due to flooding last year may now be behind us. Conversely, a Western Digital sales rep had hold me not to expect disks in volume until much later in the calendar year. So it’s not yet clear if these are just early samples or if disks are truly shipping in volume. 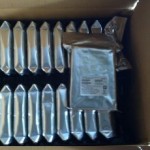 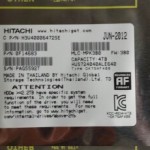